One of my favorite blogs to visit is The Ancient Gaming Noob (TAGN) and he recently posted an Influential 15Â  list – started by another blogger and other sites are also playing along. The parts I read indicated not too many rules, but just do not overthink it – only take 15 minutes, and list them out.

This sounds like fun. I am going in chronological order!

I spent most of my allowance money playing this game with two of my best friends at the local bowling alley. It was close enough to our school that we could run there at lunch breaks, and always went right after school as well – but just for 20 minutes before racing home. This introduced me to the side scrolling platform [honorable mentions: Ghost and Goblins, Castlevania, Bionic Commando]

Two teams – the red, power hitting team and the blue, speedy team. That was it in this baseball game. My brother and I played for hours at home – nice to not have to be at the arcade. (I always got stuck with the blue team). [Honorable mention: Madden (I still buy it every few years]

My first foray into the Sierra games series (King’s quest, Space Quest, etc.) and it was always a weekend event at one of my friend’s houses who had it. I think it took us 6 months to complete, since we only had limited weekend time (we mostly played outside – kids those days!)[honorable mention – Maniac Mansion]

Another arcade favorite the one on one bragging rights was a blast. Learning the combos, fighting friends (and arcade enemies) for the right to stay on the machine for the next challenger… flipping a coin for the left or right hand side. All sorts of home field advantages. [Honorable mention: Mortal Combat]

Exploration, adventure, discovery. Space. Has anyone come close since? I am avoiding throwing my money at Star Citizen yet watching it closely. That is a completely separate blog post. [Honorable Mention: Wing Commander. If only for the space.]

We had huge contests at university with Doom – inter dorm rivalries. My philosophy class suffered fiercely. I made a philosophical argument about augmented reality to the prof and he BFG’d me. University was so cool. [Honorable mention: Half Life]

Oh Sega hockey, with the one move that would score 100% of the time.. that was up to you do defend properly. Both ends of the rink, there was that ONE move. Yet it was still awesome. Plus bleeding heads.

Turn based mastery. This is on many ‘best of ever” lists, so not going to explain its full awesome-ness. Many have explained it better than I ever could. Xcom is the perfect example of a game you loved but refuse to play it again. I have it through steam. It sucked to relive it – but awesome the first time around. We are not conditioned to accept failing the first X missions before we have a chance. (see what I did there?) [Honorable mention – Civ 1 – bit of a stretch, but very turn based]

I had played a lot of Pen and Paper games and this one reminded me the most of them. I hadn’t played a lot of D&D at the time Â and this was my first real foray and experience into that. I don’t even remember if I won or what happened in the gameÂ – I just remember the hours spent hunched in the darkness… in amazement. Just one more encounter. One more.

The AIÂ could beÂ buggy as hell when you were planning your rescues, but this was an AMAZING shooter – one shot and you are dead, get caught/spotted and the hostages are dead. Great premise and superbly executed at the time. You could do many missions in many different ways and had the choice of your own path. The planning and thinking part was as exciting for me as the executions. And oh yes,Â permadeath!Â [Honorable mention: Counter Strike]

The MMO game changer that has spawned 100 clones, for better or for worse (often better, jaded vets may argue worse. It doesn’t even matter anymore. It was awesome and really kickstarted the genre.) It has ruined MMOs for me since, but that is also because of the testserver play environment (hint: community). The rose colored glasses often adorned! Sims the original was the first game that I could get my girlfriends to play. And my non-gaming roommates. It was the first time I realized games could be for everyone. Then I invented the Wii. (or should have, at least). All that being said, I am pretty sure the things my girlfriend at the timeÂ did to the Sims (or tried to do) made me realize that maybe she wasn’t the one. Sicko. May have saved my life.

My second MMO I played the heck out of and my first real PVP experience was also amazing. I also played on the testserver (Pendragon) and the strength of the community there really improved the overall experience. Sadly, game developers have learned that test servers make bad for the quick hitting types of testing they want with enough sample size, and they don’t really exist anymore. The lesson they should have learned is that smaller, more dedicated communities make for stronger ties. Another post. DAOC taught me to embrace PVP and how humans always beat AI on experience – always.

What to say? The most successful MMO ever made took an inaccessible genre and made it easy for everyone to participate. While I have spent my fair share of time arguing WoW has hurt theÂ MMO space in many ways, you cannot argue against its influence. I still go back every expansion, do the theme park rides, /hug and /hi to my friends still playing, and then out again.Â  I think the next MMO Blizzard makes is going to say a lot about what they have learned from WoW. I’m intrigued.

The multiplayer FPS I judge all other FPSs against. It was great. It was better than great – it was awesome. The kits, the vehicles, everything. COD always felt too twitchy and gamey in comparison (even the DICE successors did) and I started playing more strategic, slower paced shooters afterwards. BF2142 was just the perfect balance for *me*. [Honorable Mention: Project Reality] 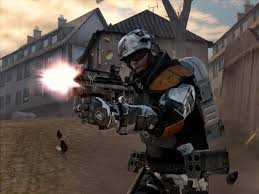 There is my list! Crazy, and a *bit* sad that the most recent game launch on my list is 8 years old already, but influence is influence. As I re-read this there were a few I wanted to add (RTS such as Warcraft -or- Command & Conquer) but I decided to keep it pure – the ones that spoke to me first. I’m sure as I read through other’s lists I’ll have many an “aha!” moment. I hope mine brought along some positive smiles and memories!